Thanks for everything Carlton, it means a lot to me that you pushed me the days I didn't want to workout as hard as I should but I see now that the hard work paid off.  I'm stronger than ever.  I even did a 460 squat 4x and I was shocked. My bench is still unbelievable, its like I'm getting bigger and stronger everyday.  Thanks bro. Eat those weights, beat those boys on the field.

It’s been my pleasure to know Carlton Weatherford for 10 years, both as a Hokie football player and as a graduate assistant strength and conditioning coach at Virginia Tech.  Carlton excelled in all areas of training as a football player; including increasing his body weight from 195 lbs to 235 lbs, while improving his 40 yard speed from 4.7 in 2003 to 4.5 in 2006.

Carlton was a multiple winner of our Super Iron Hokie Award, our highest level of strength achievement.

His best efforts were:

While Carlton’s achievements in training and on the field are substantial, his ability to teach and motivate young athletes is equally impressive. I watched Carlton train all of our young football players almost daily for 2 years. He always approached them with enthusiasm, patience, and respect. Carlton worked closely with my son, Bo, a former Virginia Tech walk-on football player, and helped him immensely.  Carlton is a Christian man of character. I trust him completely. I don’t think you can have a better role model working with your kids.

Thanks for pushing me hard during NFL combine training.  I felt great out there working out in front of teams.  Hard work pays off thanks for your help.

I enjoyed my training experience down there including yourself especially.  It really got me into top notch physical shape.  My body transformed and people could tell the difference on sight. I'm constantly in the weight room trying to do as much as I can to get the same type of workout you guys put myself and others through.  It really got me into football shape and I wouldn't make a different descision about training for the world.  I was completely 100% satisfied with the weight lifting program and explosion drills that helps us to perform better on the field and at the combine.

Carlton has helped me transform my body into a working machine.  He has pushed me beyond what I thought was my limit to help me accomplish my dream of playing in the NFL.  He invested his time and all his effort to ensure that I was performing at my optimum ability.  He has given me the stepping stones which have helped me achieve my dream for the past two years of playing in the NFL.

Carlton, you have been the biggest positive influence Andrew has had over the last 2 years. The gains Andrew has made during that time have exceeded all expectations we had coming in. When you started with him, he was probably 160 soaking wet. He is now near 215 lbs., and close to the strongest guy on his High School team as a FRESHMAN! Although most classes are a group, more often than not it ended up just you and Andrew......and you doing the workout with him! That sure got Andrew's juices going! To make a 14 now 15 year old believe he can compete with a grown man who played football in college at the highest level. I wasn't there for your last workout with him, but heard you had a leg press competition with him at 400 plus on the leg sled. He said he got 21, and you got 28. And your ab battles on the decline bench with the medicine ball were fun to watch too! Andrew's dream is to play big time college football, and if he reaches that goal, Carlton Weatherford will be a big reason why. At this point I can safely say that you gave Andrew proper instruction, found the best way to motivate him, and challanged him to be all he could be. ......God Bless you!

I enjoyed having you train me and I have improved greatly from it. You helped me recover from my torn MCL and have gotten my legs back to were they should be. My bench before I started training with you was around 205 and now it is all the way up to 295 in a little over a year. My squat max was at 275 and now it has jumped up to 405. I am now supposed to be starting d end for varsity and I know I wouldn't have been able to do that if you didn't train me as hard as you did.  Thanks for everything!

I am a USATF Level 1 Certified Track and Field Coach.  My 16 year old son has competed in track and field since he was 11 years old in the 100 meter and 200 meter events.  His best time in the 100 meters was 11.29 as a sophomore.  I was very impressed with Carlton's knowledge of what it takes to improve sprint speed and how the strength training program should be modifed for track and felt comfortable turning him over to Carlton.   My son began strength and performance training with Carlton in the offseason of his junior year and ran a PR of 10.92 in the 100 meters.  He is the top returning athlete in his division and has received a scholarship offer and we are expecting more to come after his senior season.  I truly believe this would not have happened without Carlton, thank you Carlton - you are the best!!

Here is my quote courtesy of Vince Lombardi:  "Some of us will do our jobs well and some will not, but we will be judged by only one thing-the result." This quote says it all.  My son Alec had the priviledge of being trained by Carlton Weatherford.  Because of Carlton's strength of character and commitment to my son, Alec was able to achieve each goal he set out to do.  Carlton's passion for training shows with all of the athletes.  He pushes them and never allows them to say the words, "I can't."

As a part of the Virginia Tech cheerleading squad from 2006-2010, Carlton played a key role in my success  and progress within the athletic program. Carlton was the strength and conditioning coach who pushed me to earn the title of Strength and Conditioning Athlete of the Year in 2009. Through constant teaching, motivation, and extra time in the gym, I learned how to use and manipulate the gum for my specific needs. From strength training to cardio workouts, I continue to use Carlton's teachings and have moved on to cheer professionally for the Baltimore Ravens football team. Understanding your body is vital, from proper eating and workouts to necessary rest and injury prevention; Carlton's coaching and teaching will play a role throughout the rest of my life.

Nails's pitching coach has been working with him pitching from 50 feet which is the new distance for him this year.  He was popping the glove really hard so they gunned him and he was hitting 51mph.  They think he hit 55 before they pulled out the gun.  He says it is because he is working with you building up his "guns".  You are so wonderful with him and we appreciate it.

﻿PICTURED BELOW ARE SOME OF THE ATHLETES CARLTON HAS HAD THE OPPORTUNITY TO WORK WITH. 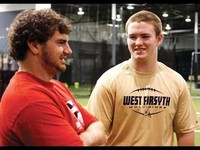 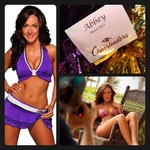